Now you too can benefit from personalized coaching from the most sought after coach in the sport. No matter where you call home, you can take Mark's analysis of your game with you to the center and start seeing higher scores immediately! Watch this video to learn more about virtual coaching options with Mark Baker.

Three Steps to Start Working One-on-One with Mark Baker:
Step 1 - Choose the right virtual lesson solution for you
Step 2 - Fill out the assessment or evaluation form
Step 3 - Purchase your lesson 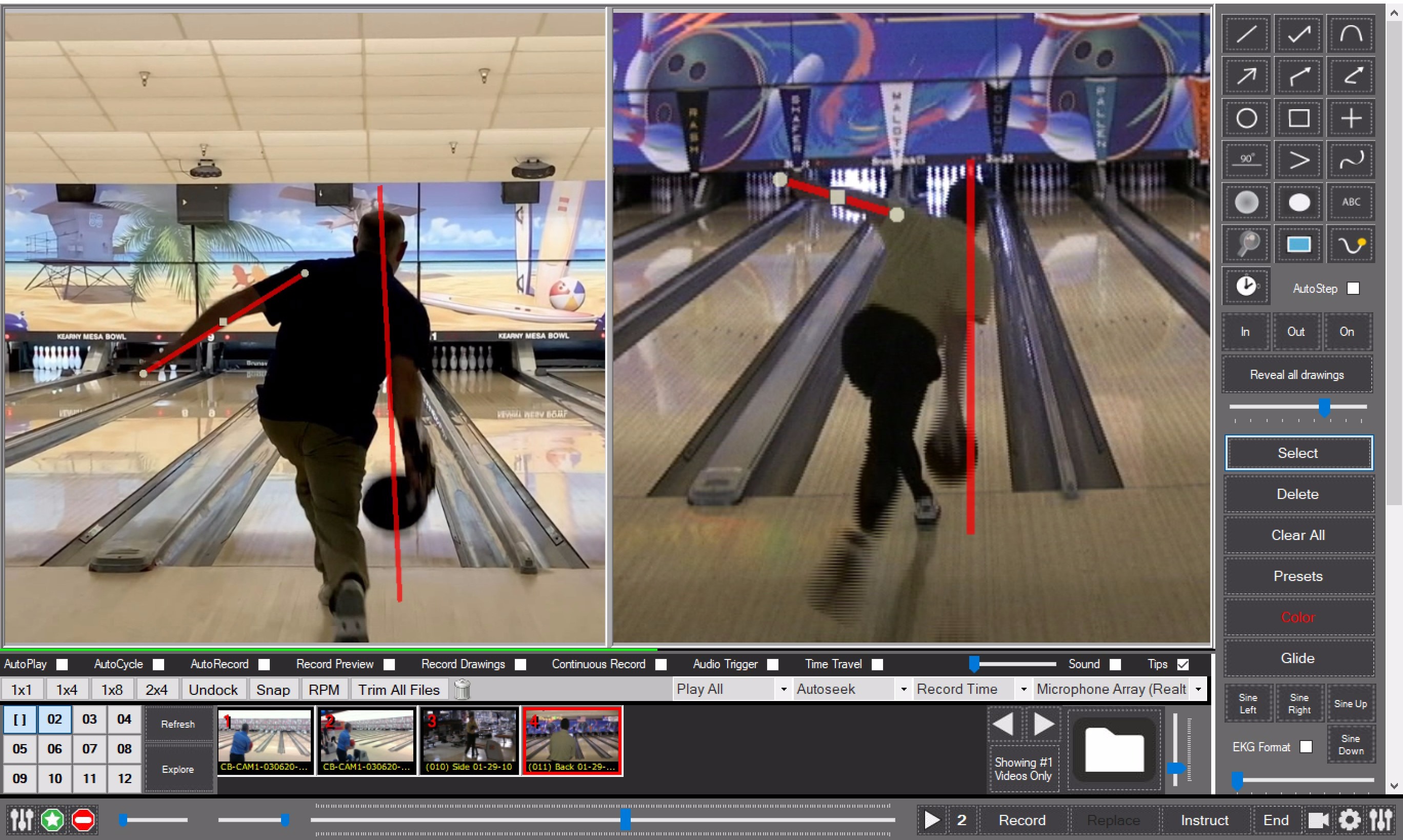 Features:
- An assessment of your bowling history providing insights into your current development in the sport
- Pre-video analysis of your game indentifying the top challenges that will be addressed in the upcoming comprehensive video assessment
- In-depth video motion analysis of your stance, swing, footwork, spine angle at release, and ball direction as seen from from behind
- Additional video motion analysis of your pushaway, timing relationship between your swing and footwork, spine angle and ball launch trajectory and downlane motion as seen from the side
- Lesson wrap up including practice tips, goal setting, and next steps to improvement
- Supplementary video instruction as necessary 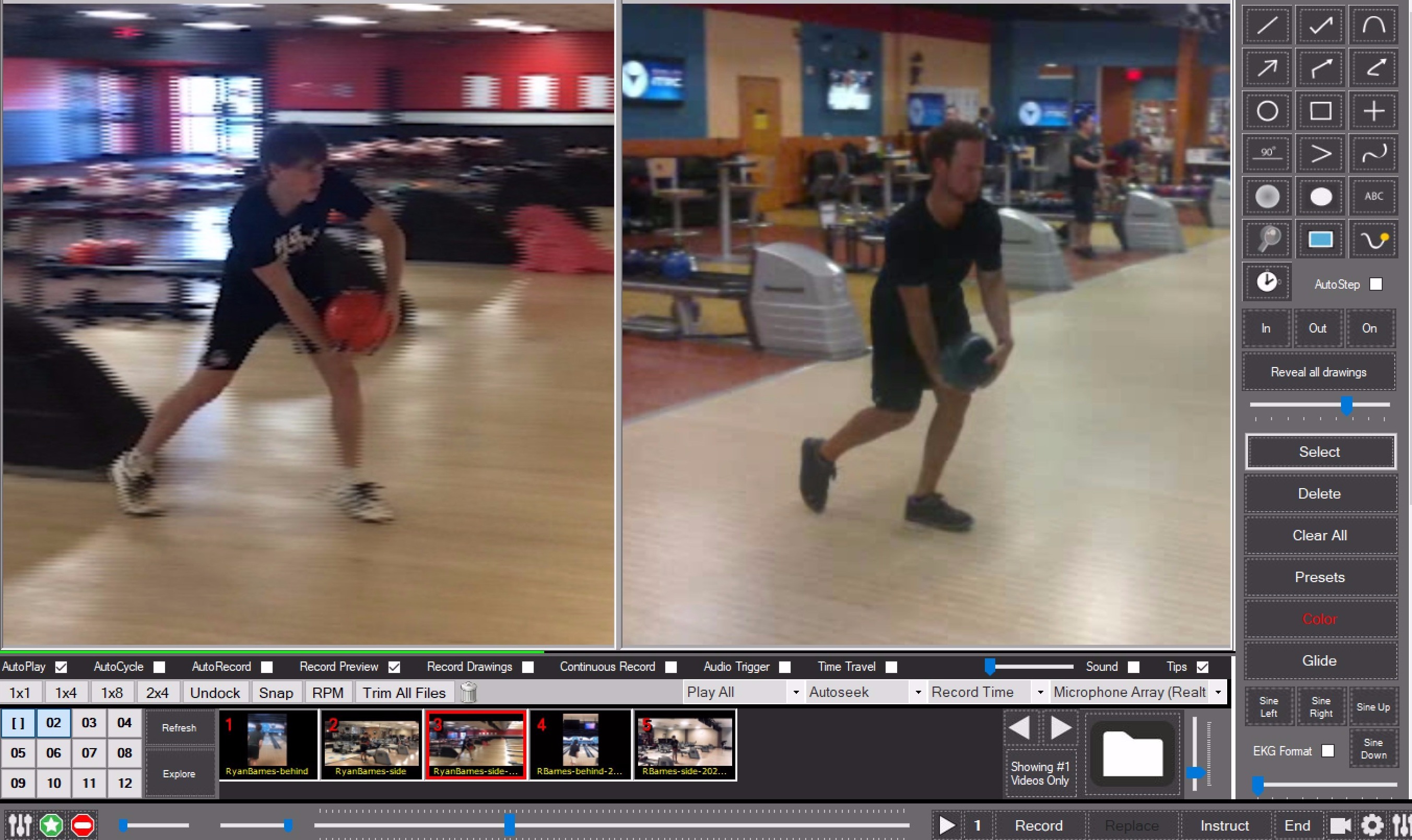 Everyone, from hall-of-fame greats to beginner league bowlers, need help maintaining their skills and staying on track towards consistently higher scores. This option is perfect for bowlers who have completed the Comprehensive Bowler Assessment and want to continue to improve. You will receive directions on what to video based on a quick survey of what's going on in your game and what you want to concentrate on.

The maintenance evaluation option features voice-over breakdown on what to work on to the correct flaws identified during your video's evaluation.

How do I record my bowling game videos?

Mark suggests Comprehensive Bowler Assessment customers submit up to three (3) videos of their bowling swing at specific locations in the bowling center: from behind the bowler, from the side, and, optionally, from a position somewhere inbetween the behind and side positions.
- from behind: the video taker is positioned behind the bowler about a step outside of the bowler's throwing shoulder. The camera should be oriented vertically (or portrait), held at shoulder height, and zoomed out so that the bowler is visible from head to foot in the frame throughout the shot. Do not zoom in on the bowler as they approach the foul line and keep the camera as stable as possible.
- from the side: the camera is pointed at the bowler's throwing side and follows the shot from the 1st step until the ball is released. The video taker should stand about two lanes away and close to the foul line. Orient the camera horizontally (or landscape), and fill the frame with the bowler so that the bowling ball, as well as the feet, are seen throughout the shot. Keep the bowler in the center of the frame as you follow the bowler, stopping the panning motion at the point of release and hold for a second or two -- do not continue panning in order to follow the ball to the pins.
- from inbetween the behind and side positions: the video taker should stand 1 to 2 steps behind the bowler, and 3 to 4 steps to side. Orient the camera vertically (or portrait) and keep the bowler centered on the frame throughout the shot. Make sure the ball is seen throughout the swing as well as the bowler's feet. Do not zoom the camera at any point during the shot.

Maintenance Evaluation customers typically submit the same video shots as described above but may receive additional direction on what to video based on the maintenance survey answers,

How do I deliver my videos to you?

Send a link to your hosted video files
By far the most efficient way to share your video with us is to email links to your videos files hosted on a third party service to mark@markbakerbowling.com.  Using a third party file hosting service (Google Drive, DropBox, OneDrive, Box, etc...) and sending us links to your files is the best way to ensure we can work with high quality video of your bowling swings. The video files sit on a server where file size is not an issue. Upload your video to the host of your choice, then paste the link to the hosted file into an email and send the message to mark@markbakerbowling.com.

Send your video files by email as attachments
Alternatively, you can send individual video files by email attachment to mark@markbakerbowling.com. Email services such as Gmail, Outlook, and Yahoo mail will stop you from attaching file sizes that exceed their limits so following these tips will help avoid being blocked BEFORE sending your files:
- set your video record settings to: 720p HD at 30 fps BEFORE taking the video
- trim the video to only the swing...typical swings take less than 6 seconds
- attach one video per email
- ZIP the video file to compress the file size

How long will it take before I receive your analysis?

After submitting your bowler assessment or maintenance evaluation, you will receive an email providing instructions on how to pay for your lesson using PayPal. Following payment for the virtual lesson, you can submit video of your bowling swings for analysis.

Once we've downloaded your video files and confirmed they are OK to process, you'll receive a lesson delivery date estimate from Mark. Typical processing time is 2-4 days.

Do I have to purchase a Comprehensive Bowler Assessment before I can take advantage of the Maintenance Evaluation option?

The short answer is no, Mark will be happy to provide a maintenance evaluation to new clients who are only looking to target a particular issue in their game. Please submit a Maintenance evalution survey to begin working with Mark.

I submitted my Assessment or Evaluation ... what's next?

Your assessment or evaluation is on the way to Mark. After a quick review of your answers, you'll get an email message within 48 hours with instructions on how to complete your purchase.

How to Video Your Bowling Game

In this video, Mark gives tips on how to maximize the quality of your virtual lesson by showing you where to stand in the bowling center for the best results when you capture your game on video.